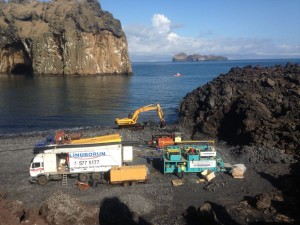 Mincon a company with over 36 years of manufacturing experience in Rock Drilling Equipment has over the last eleven years developed a complete range of Steerable Hard Rock Hammer Systems for trenchless drilling applications. With the most extensive range of Pilot Hole Air Hammer systems sold worldwide the current Mincon range of tools is capable of drilling pilot hole sizes from 3 ½” to 9 1/4”.  With the industry’s only patented Pull Reaming Hammer reamed hole sizes in rock of up to 14” with before unseen production rates are now possible.

Mincon HDD Specialist, Jason Miller, was invited to participate in commissioning a HDD80 Pull Reaming Hammer in Vestmannaeyjar Island, Iceland. The customer for this project was Linuborun EHF of Reykjavic, Iceland. Vestmannaeyjar Island like most of Iceland is Volcanic. Volcanic activity in the area probably started about 100,000-200,000 years ago however it is believed that the island is younger than this, at 10,000-20,000 years old.

The scope of work for this project involved the installation of utilities to expand the Islands network.  The length of the bore was 64 Meters in solid rock with a large void 3 meters from entry side. When Mincon arrived on site the pilot bore and some of the reaming had already been completed. The pilot hole was initially drilled with a Ditch Witch JT4020 AT and then completed using an air hammer. The pilot was a straight bore through a large rock wall with little or no steering required. The customer initially attempted to use a 12” (305mm) Roller Reamer to ream the pilot hole. After 5 hours drilling and advancing only 18 meters the roller reamer cones were destroyed. At this point it was decided to use the Mincon HDD80 Pull Reaming Hammer to finish the bore. 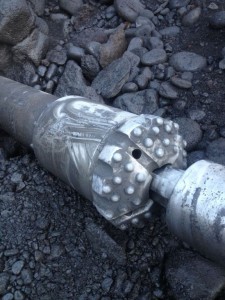 The Mincon HDD80 Pull Reaming Hammer was installed with a 10” (254mm) reaming bit. Using a polymer and foam mixture along with compressed air to carry the cuttings from the bore production was steady and after 7 hours and 46 meters drilling the tool exited the bore. A second 14” (356mm) reaming bit was then installed and opened the entire 64 meter bore in 8 hours. The production rates of the Mincon HDD80 Pull Reaming hammer far surpassed the conventional tooling used by Linuborun in the past. It was remarked that the vibration to their drill was also greatly reduced as they were using significantly less pullback force than required with a roller cone reamer. Upon completion both a 6” (152mm) and 3” (76mm) pipe were installed. Both the 10” and 14” bits emerged with minimal to no wear visible to them.

The job was extremely successful and the contractors Linuborun EHF were extremely happy with the performance of their Mincon HDD80 Pull Reaming Hammer and bits.

We would like to express our sincere thanks to the very professional people at Linuborun EHF and also to Mincon’s HDD dealer for the region, Mincon Sweden AB. It was a combination of professional drilling contractors and the right tooling that proved successful.

Mincon recently launched the newest addition to their Pilot Hole Air Hammer systems, the HDD90. Suited for large Pipeline Horizontal Directional Drills, the HDD90 drills a 9 ¼” Pilot Bore extremely efficiently in even the hardest rock conditions. Building on the heritage of Mincon’s vast experience in Hard Rock directional drilling the HDD90 is set to become the tool of choice for production minded contractors.

Mincon’s HDD products are primarily used for trenchless utility installation applications. Mincon currently have the broadest range of pilot hole hammers available globally. In addition to the HDD90 the current range consists of the following tools:

Mincon are a global manufacturer of Hard Rock drilling Tools. With Manufacturing plants in Ireland, Australia and the USA, coupled with a strong global network of distribution Mincon offers the solution to your Hard Rock drilling needs.