Mincon in the USA

The following article featured in GeoDrilling International magazine in March 2013:

Mincon a global manufacturer of premium quality drilling tools has had a strong focus on the market in the USA since the company’s founding in the late 1970’s. 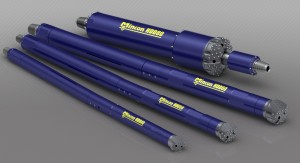 The USA has remained a key part of the Mincon group strategy for growth with its strong and diverse economy. This growth has been accomplished by developing a strong network of distribution controlled by Mincon, Inc. Mincon, Inc., located . in Roanoke, Virginia, was established in 1991 and is the sales and distribution arm of the Mincon group for North America. By importing and stocking products from Mincon’s Shannon Irish and Australian manufacturing plants and further distributing these through a network of approved dealers, allows Mincon to remain close to the end users of our products and react quickly to their needs.

In addition to the sales arm of Mincon’s USA operations the group also has a state of the art manufacturing plant in Benton, Illinois, Mincon Rockdrills USA, Inc. This company joined the Mincon group in 2003. With over 27500 square feet of manufacturing space this plant focuses on the manufacture of the Mincon range of standard DTH drill bits from 3 ½” (89mm) to 22” (559mm) diameter. The plant also makes the Mincon range of Horizontal Directional drill bits and a range of casing crowns for the civil construction industry. These products are distributed globally through Mincon’s distribution network. 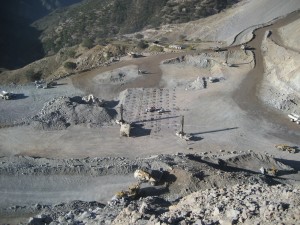 In 2002 the Mincon Group commenced development of a range of steerable hammer systems for the horizontal directional drilling industry. The majority of the development work on this product range has been done in the USA. Since their inception the Mincon range of HDD Hard rock systems have quickly become the benchmark for productivity and steer ability for on grade utility installations in medium to hard rock. The Mincon HDD division is headquartered in Roanoke, Virginia. This division is responsible for global product development of Mincon’s HDD tooling.

Mincon’s core business is in vertical DTH drilling in all industries. With the current global economies as they are mining remains the strongest although industries like water well and geothermal drilling still require significant attention to maintain and foster the relationships with dealers and end users that have been developed over the years. 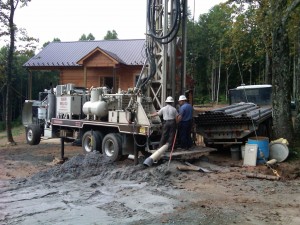 Geothermal drilling has seen a large uptake in the USA over the past several years with a large amount of Federal, State and Municipal projects being completed. These projects have become extremely competitive and as such it is essential to ensure any cost saving methods or tooling are employed. The single largest cost and unknown part of any of these projects is the geothermal bore drilling. A typical project may have four to five hundred bores each four hundred and fifty feet deep. Whilst test bores prove to be somewhat useful in the bidding process, often the geology varies greatly from this test bore, and water of any significant amount may not have been encountered. In projects where significant quantities of water are experienced a solution is required that allows the contractor to maintain a productive rate of drilling and overcome the backpressure that is burning excess fuel and stealing penetration rates. 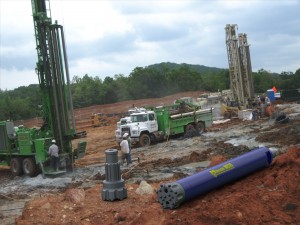 To this end, Mincon developed the MC range of DTH hammers. This range of tools has proved to be second to none in geothermal production drilling especially where large volumes of water are encountered in the bore. They have an extremely efficient air exhaust system that quickly moves cuttings and water away from the bit face and overcome the effects of the back pressure. The short length of the shank that is fully enclosed within the chuck or driver sub gives an excellent energy transfer from the piston due to the improved piston to bit weight ratio. The drill bits also do not have a foot valve (blow tube) in them eliminating any costly down time issues from broken tubes.