Bringing this experience to the new line of hammers produced a design that is second to none in performance, reliability and sample quality. 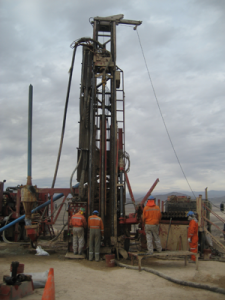 The innovative design is centered on the patented drill bit retention system.  The system offers a number of distinct advantages.  The system does not use the traditional bit retaining ring that is secured above the chuck (drive sub).  Instead retaining pins are employed to secure the bit inside the chuck, providing complete support for the bit shank within the chuck and also allows for an extremely robust shank design.  This greatly reduces the chance of drill bit shanking compared with traditional methods, a real money saver compared with having to trip out at 2000 feet and lose the hole.

The drill bit design eliminates the need for a bit shroud to seal the hole.  Firstly this delivers a cost saving as the shroud method of sealing the hole requires at least one shroud per bit.  Secondly, with the sealing method incorporated into the drill bit and matched to the drill bit size there is no need to stock multiple sizes of bit shrouds.

Since the first hammers were commissioned the results have been impressive.  The penetration rates being produced are very positive, exceeding those produced by other brands, with or without the use of high pressure boosters.  The sample quality being recovered is also above expectations.  Innovative design improvements incorporated into the sample tubes is producing excellent wear resistance and better than average life.

The drill bit design has a very efficient air delivery method to the bit face.  This is producing highly favorable drilling conditions in large volumes of water allowing drilling to continue longer and deeper before high pressure boosters are employed.

At present the range of hammers covers drilling from 4” to 6” drilling and both Remet and Metzke connections are available in a number of different sizes.