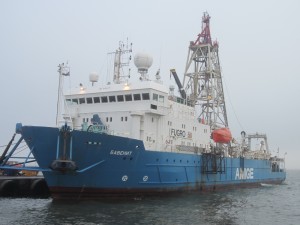 Fugro, a company based out of the Netherland’s, is primarily an off-shore drilling company, servicing the oil and gas industry, and is currently operating off the Namibian coast where they are doing core sampling for their customer.

Mincon Southern Africa as the local BAROID IDP agent, was contacted due to the fact that they could supply direct into the ship, when it berthed in Walvis Bay, Namibia. Usually, the ship, the M.S BAVENIT, gets its drilling muds from Europe, but due to the fact that they are in the Atlantic Ocean, thousands of miles from their home base, Mincon were able to supply their needs.

This is a first for Mincon, as they normally supply their products to land-based drilling operations.

It was fairly challenging to service this order, as the product had to be supplied in bulk, as the ship has built-in silo’s on-board, and no means of handling bagged product, which is the normal packaging. The Bentonite, being a powder, could be shipped in bulk Road Tankers, and this was achieved using 4 x 30 ton tankers which loaded the product in Johannesburg, South Africa, and taking 4 days to travel the 2,000 odd klms to get to Walvis Bay. On arrival at Walvis Bay, the tankers were hooked up to the ships silo’s and the Bentonite was pumped into the ship.

Ton Mulder, the Technical Superintendent for Fugro Marine, was extremely happy with the service they got from Mincon, and said that he hoped this would be the start of a long relationship with Mincon, as they will be operating in the southern Atlantic for the foreseeable future, and he was sure that he would need further supplies from us. 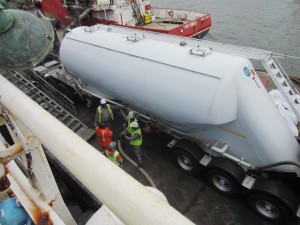 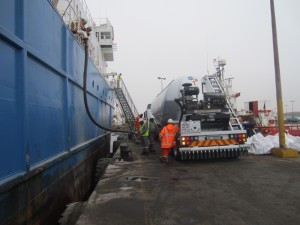